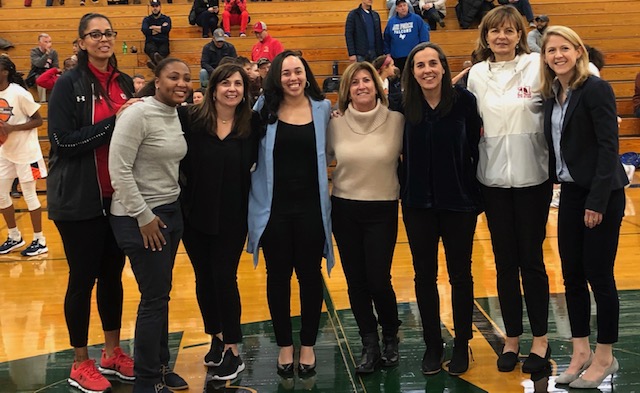 Angling for a little attention in a world where worthwhile causes are as prevalent as iphones, the quiet battle being waged by a group of Chicago-area women is much more important than it may appear.

Nearly 50 years after Title IX gave girls the legal right to compete on the same proverbial playing field as boys, there are far fewer women who are coaching them. In Illinois this 2019-2020 season, 76 percent of girls’ high school basketball teams are coached by men.

Forget for now the very real argument that women should be considered on every level for boys’ and men’s coaching jobs. That’s the ultimate goal, of course. But first things first.

“The big thing with us is that we felt excluded in our own game, on the outside looking in and it’s not good for the girls to see that,” said Cara Doyle, in her eighth year coaching the girls’ team at St. Ignatius.

And so Doyle, New Trier coach Teri Rodgers, Glenbard West coach Kristi Faulkner and Ashley Luke, formerly the coach at Mother McAuley and now guiding the girls’ team at Norcross High in the Atlanta area, decided they’d do something to let people know.

This weekend at Glenbard West, the inaugural Grow the Game tournament and Shootout is “highlighting” 14 girls’ basketball programs led by female head coaches. They want to celebrate girls and women in basketball, they say. But it’s more than that, said Rodgers

The wave of men coaching girls’ teams began in the 70s, when male athletic directors thought men were their best candidates and men stopped looking at it as an insult and realized it wasn’t a career-killer.

“From a societal point of view, any profession that becomes popular and more profitable, [this happens],” Rodgers said.

Rodgers, who has more than 500 wins in her 22 years as the Trevians coach, was a multi-sport athlete and All-State basketball player at Libertyville who went on to play at Duke. All but one of the women coaches at the Grow the Game tournament played for Division I college programs, with three – Luke, Marist’s Mary Pat Connelly and Zion-Benton’s Tonya Johnson – also playing professionally in the WNBA or overseas.

Rodgers, who currently has two former players now competing at Notre Dame, called it an “incredible moment” five years ago, when she coached against one of her former players. “That was a dream, really,” she said.

Same thing for Doyle when she had a former player coaching her freshman team. But clearly, it’s not enough.

Doyle, the mother of four kids, 12 and under, has taken it upon herself to lecture her friends and fellow moms.

“Every mom I know, so many were competitive athletes, and I tell them, ‘You’ve got to coach t-ball and third-grade soccer.’ We buy [our daughters] play kitchens and it’s gotta be the same way,” she said. “They have to see us doing this and making decisions and all the other stuff that goes into coaching. My kids [two boys and two girls] say, ‘What if we don’t want to coach?’ and I tell them, ‘Well, one of you has to.’

“My 12-year-old son wears a St. Ignatius girls’ basketball t-shirt and that’s a win right there.”

By forming their unofficial committee, Doyle, Rodgers and the others realized they could collaborate and discuss their unique issues. “Like the ref coming up to your male assistant, assuming he’s the head coach,” Rogers said. “It’s like, ‘OK, I’m not crazy if this is happening to you as well.’

“But rather than focusing on the negative stuff, we try to focus on the positives we bring and just support each other.”

They also noticed something else interesting. “One thing I realized when I talk to my team is they don’t keep score the way we do – ‘The boys’ got new uniforms’ and ‘We have to use the downstairs gym.’” Doyle said. “They don’t come in with chips on their shoulders.”

Refreshing as that may be, she said, the girls may be in for a shock.

“When they get a job, it might not be as obvious,” Doyle said, “But they may look around one day and say ‘Wait, I did all this work and I’m not getting the same opportunities.’”

All the more reason to find their voices now.