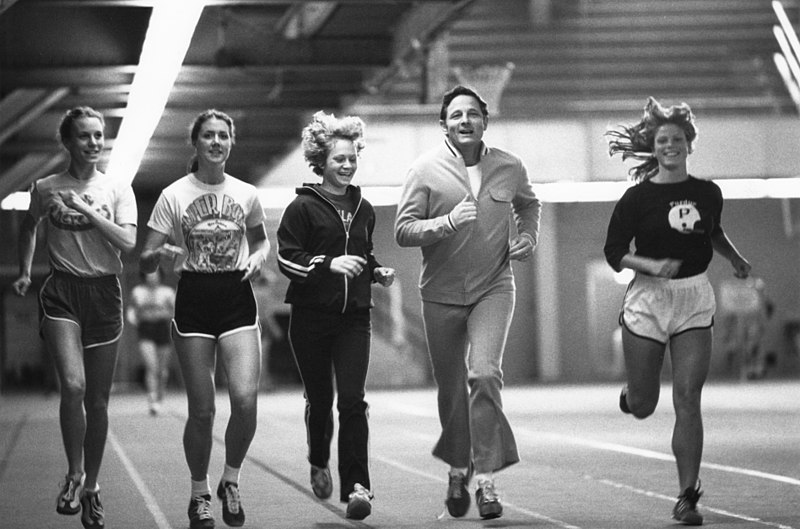 He answered his own phone, which threw me when I realized it was really him. But there was little pretense about Birch Bayh, who died today at 91.

I had called to interview him for my book. It was 2005 and the U.S. Senator from Indiana and one-time Democratic nominee for President had no warning that I would call, no staff to hold me off or even make an appointment. He was 77 years old and he said he would be happy to speak to me.

I wanted to know how he became the author of Title IX, which became law in 1972. I knew he wanted to give women equal opportunities in public education. What I did not know was the inspiration two women, in particular, had in his life and on his belief system.

He told me that he was 12 when he went to live on his grandparents’ farm northwest of Terre Haute, Indiana, after his mother Leah died and his father went to China with the Army Air Force just before World War II. His maternal grandmother Kate Hollingsworth had been a school marm and he said one of the biggest influences in his life was observing her.

“It never entered my mind that women aren’t as important as men because I could see my grandmother working long after my granddad was on the front porch, smoking his pipe,” Bayh said.

“I don’t think Granddad made a single decision of consequence that Kate didn’t have a voice in it. But what I didn’t know was that my grandmother could not have inherited that farm. Once I got a little older and understood what was going on, I insisted they re-write their will and put it under joint ownership. But at the time, all those things were going on that I was not aware of.”

As a boy, Bayh’s father Birch Sr., coached four sports at Indiana State and was also the director of physical education for the Washington D.C. public school system.

“In the mid 30s,” Bayh recalled, “I remember us all gathering around the breakfast table and Dad telling us he was going to testify before Congress. I said, ‘What are you going to say to them, Dad?’ And he told me, ‘There’s going to be a day when we need to appropriate money for girls’ physical education and if they ask why, I’m going to say that little girls need strong bodies to carry strong minds around in, just like little boys do.’

“It had to be subliminal, but I do remember that.”

The former Senator told me about his first wife Marvella, and that they were “just two kids when we met at 19. It was love at first sight and I went home and told my family I found the person I wanted to marry.”

Marvella was a straight-A student in high school, the first girl to be elected class president and later a national speech champion, defeating her future husband in the competition. But in 1951, she was denied admission to the University of Virginia, where it would be nearly 20 years before state law allowed women in.

Eventually, she graduated from college and after a near fatal car accident that had her in a coma for almost a month, she completed law school as well, graduating on the same day as her husband.

When Bayh spoke of his career, he used the pronoun “we,” calling himself and Marvella “a tandem operation” and she would become his key policy adviser.

Marvella died of cancer in April of 1979, less than a month after our high school girls’ basketball team won a state championship that did not exist just three years earlier.

Marvella was not a sports fan. When she went to the World Series with her husband and father-in-law, the Senator told me, she brought along the New York Times to read. “But what she said,” he recalled, “is that we can’t afford to ignore the development of 53 percent of the brainpower in this country. I had no idea how far that basic idea would take off.”

I told him that he changed our lives.

“The first time Marvella and I ever met, over lunch, we each said we wanted to make a difference with our lives and that a career in government could do that,” he told me. “I think Title IX has done that and I’m proud to have been a part of it.”