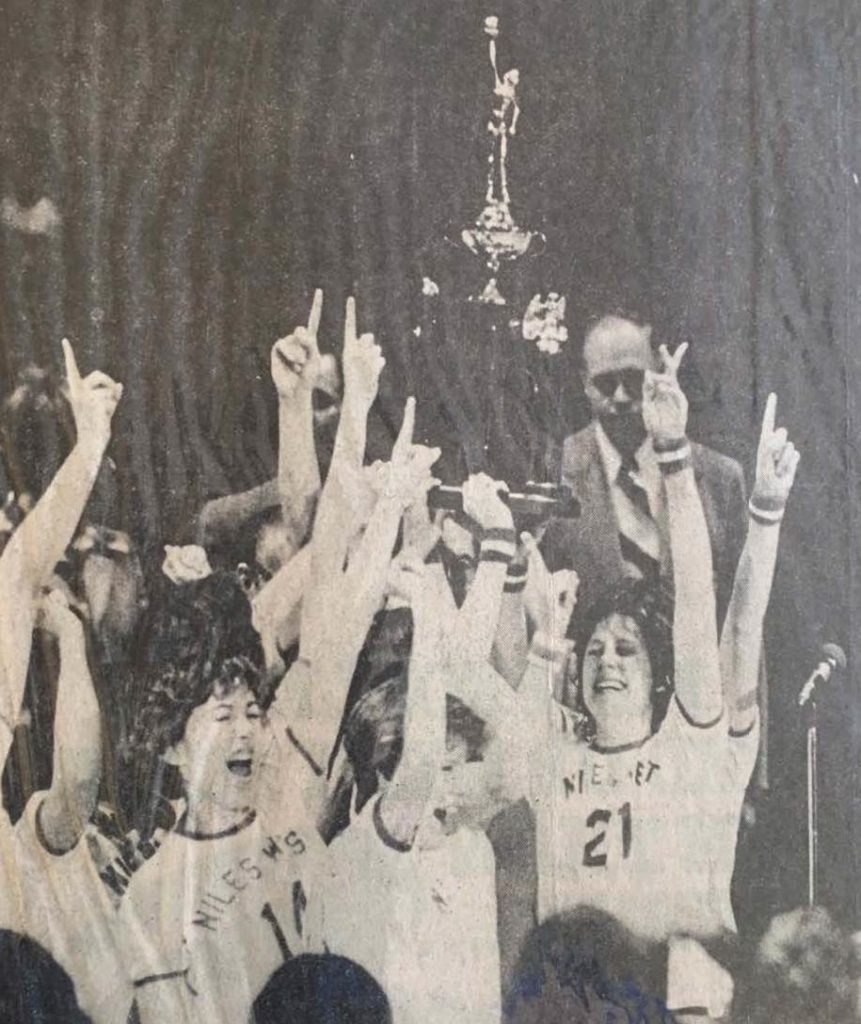 I remember my dad being depressed over a big birthday once, about time passing “too quickly,” about “being old.” And I remember, in my infinite wisdom, saying something like “But you’re just one day older than you were yesterday, so what’s the big deal?”

I was probably about 15, so smart and so smug.

I am recalling that conversation because 40 years ago today, my Niles West High School teammates and I won the Illinois state girls’ basketball championship. That’s 40 — or FORTY!!! — because it feels like it needs all CAPS and multiple exclamation marks.

But I won’t say that we’re old or that time has passed too quickly, even though it has. I won’t even say, as my father often did, that I don’t know where the time has gone, because I do. It has gone to college and marriage and childbirths and Little League games and concerts and plays and graduations and career and travel and heartache and happiness and everyday stuff. Bad TV and those first years of kid-pitch in early March alone took up about 20 years.

I do not feel as if it was just yesterday that we hoisted that trophy in Champaign’s Assembly Hall because we were teenagers and my parents were in the stands and I weighed around 98 pounds, and none of that feels like yesterday at all.

I had a voice in those interviews that sounded like a gerbil and though I still tend to be self-conscious on camera and I do a funny thing with my mouth sometimes, I believe I come off a bit more sophisticated now.

Because I have spent a good dozen years, off and on, writing a book about our experience, I’ll admit I am considerably closer to those days than my friends and former teammates are. So while they may have also had squeaky voices and came across as painfully self-conscious on camera, they don’t generally have to re-live it unless I am on the phone, demanding that they do.

I guess it’s that unlike my father, I am choosing not to be sad or spooked or weirded out by this milestone. Unless I have some wiseass kid standing in front of me, horrified that I can even recall something that happened 40 years ago, I am instead embracing it. Today, of all days, on an anniversary that should be celebrated, and in a year in which I am trying to get others to share this remarkable experience with me, I am loving it.

The photos in which I look like a 10-year-old boy. The memories of being so immature and at times thoughtless, it makes me wince. The knowledge that I should have had more fun in high school, maybe not been so afraid of boys and while I was having fun and flirting, maybe done some homework once in a while. All of that is going to have to be OK.

Because that’s what it was. And because the 70s were a big deal to have lived through. We were a part of history, that basketball team. Our high school was great and our teachers and classmates supportive, coming together and getting behind us in a way I wish there was more of today.

We were silly and childish. And we were strong and resilient. I can close my eyes and still remember much of it but I don’t have to relive it to appreciate it. And I don’t have to be horrified by the passage of time. Today, I am just going to let it be what it was. And wish everyone who was there with me, a Happy 40th!!!