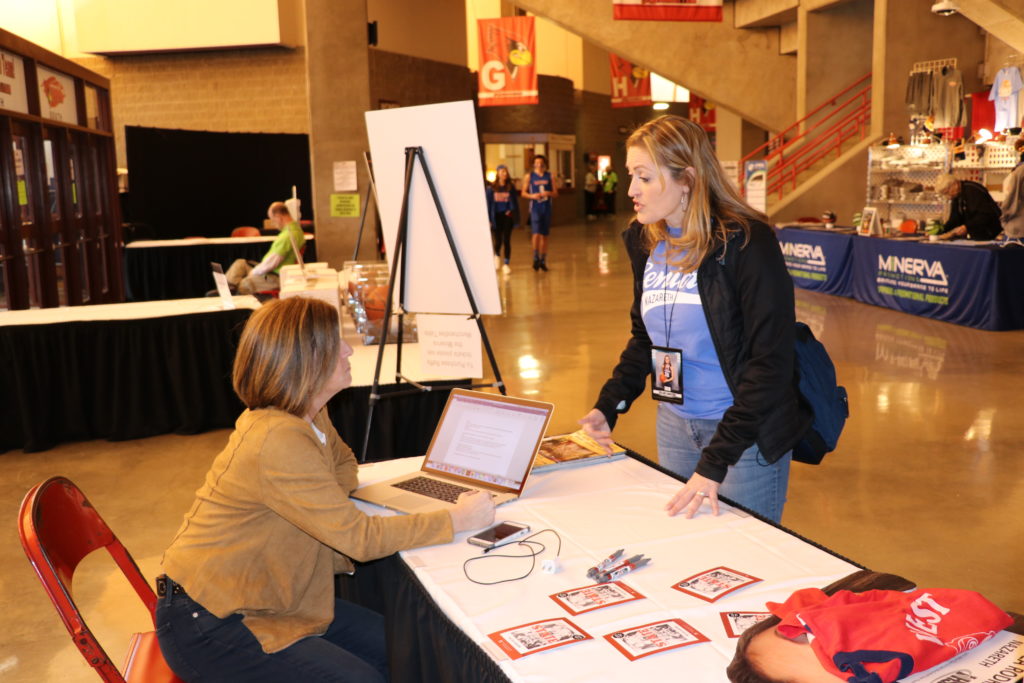 Under one arm was her daughter’s face, and around Jessie Rodriguez’ neck was a laminated picture of same daughter, the point guard on the Nazareth Academy basketball team.

The daughter’s face was approximately the size of the entire mom, one of those Fathead things that was apparently required of every mother of every girl at the Illinois state basketball tournament this weekend.

I tried to picture my mother carrying my giant face under her arm at our games a very long time ago and I can’t really do it. For one, the pictures of the faces are blown up to such an extreme, that in the case of your average teenager, every tiny blemish is roughly the size of a frisbee. Even a very long time ago, when we didn’t exercise much control over what our parents did or did not do, I don’t think we would have allowed our mothers to publicly display our facial pores magnified over 100 times their actual size.

But there I was, at Redbird Arena in Normal, Ill., with my husband Rick, watching moms carrying their daughter’s giant faces under their arms, because the Illinois High School Association was introducing my Niles West basketball team at halftime in celebration of the 40th anniversary of our state title.

I figured walk-up traffic was a given. Why? Because, Rick and I reasoned, whenever we go to Northbrook Days, our suburb’s annual carnival, we never pass up a freebie of any kind, including chip clips, plastic freezer ice scrapers and Rick’s favorite item, a junior police badge that I believe he knocked over several small children to obtain.

Parents of Illinois girls’ basketball state finalists are apparently much more sophisticated nowadays, for even when I nicely thrust the postcard into the hand of one woman who asked me what it was, she waved me off with a facial expression not unlike one you’d make if someone shoved unwanted wasabi into your mouth.

Undeterred, I eventually met Jessie Rodriguez, who, trying to kill time while waiting for her daughter Laila, and wanting to find a resting spot for her daughter’s giant face, stopped at my table.

She was totally charming, at 46 a mere child compared to my teammates and I, but telling me that even 40 years later, her daughter’s team still faced the same challenges/discrimination that we did.

But the most interesting thing Jessie told me was about her own experience in high school. Describing her two athletic and hyper-competitive daughters – Laila has a full scholarship to play basketball at Trinity Christian College, where she will also study nursing – I assumed Jessie was once an athlete or at least athletic.

“Nope,” she said shaking her head. “I’m Puerto Rican, and my mother would say, “You need to learn to cook and clean, so one day when you have a family, you’ll be ready.’”

“In the 80s, this happened?” I fairly screeched.

I would have gone home completely depressed despite the whole 40th anniversary celebration thing, except that Jessie told me another story, this one with her now in college at Northern Illinois, slogging through computer science classes until one day, one of her male classmates told her something.

“Wait,” Jessie recalled saying, her eyes blazing at the mere memory of it in the concourse of the Redbird Arena. “What was that?”

“You shouldn’t be studying computer science,” he repeated. “It’s not for you.”

Jessie had already switched her major twice until she found computer science. And who was this guy to suggest she couldn’t do it. She knew exactly what he was getting at.

“I’ll see you at graduation,” she told him.

And indeed, she saw him. She, in her honors regalia, he with the sheepish look on his face.

“Well, now I know,” I said after she described her successful computer science career.

“Where your daughters got their competitiveness,” I told her.

She looked at me as if it never dawned on her that she would have passed down something that made her children successful athletes despite the fact that she never wore a uniform.

And my work was done.